There have been a few enquires in regards to the signage at Cottesloe. For those of you unaware, the S12 signage has been located at this stairway for the last four years. Before the new developments, the sign was positioned further down the embankment therefore not as visible from the path. This beach access point is officially known as S12 on the council plan.

The reason this sign has a no kiting emblem at this access way is that beach access point S10 has been officially designated for kiteboarding. With the new developments just being completed at S10, new car parking, showers and a new stairway has been finished to encourage kiters to use this access point.

So where should you rig up?

S10 is located on Marine Parade just to the south of Rosendo St or between the designated kite launch and land area; the beach strip adjacent to Rosendo and the end of Princes St.

Why has this area been designated as the kiteboarding area ?

A number of factors have been taken into consideration including a larger area to rig up your kite. This keeps the path clear and gives a wider expanse of sand dune in case of an incidence; the kiter isn’t immediately on the footpath or the road. These factors are learnings from a series of incidents and accidents over the last 13 years.

There are no official bylaws regarding kiteboarding in Cottesloe south of the groin, however a previous Gentleman’s agreement has been made and it is important to remember with increase in population, sometimes compromises have to made to ensure the safety and enjoyment of all beach users. 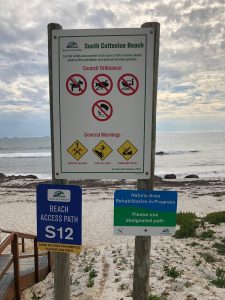 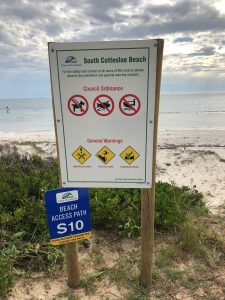 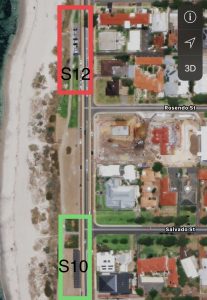