Important Information with regards to the Exclusion Zone at Woodman Point

The Australian Fairy Tern is the smallest tern species to nest in south-western Australia, listed as vulnerable under both state and federal legislation, they are a protected species. The locations where the birds breed have diminished due to feral animals (foxes and cats), land development, and rising waters. The Fairy Terns are very sensitive to disturbance when nesting (September – January) and if startled may abandon nesting. 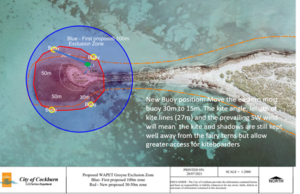 After a number of meetings with Cockburn Council, KWA was able to negotiate a smaller exclusion zone that will protect the fairy terns’ nesting areas whilst lessening the impact on kiteboarders. The original 100m exclusion zone has been significantly reduced to 30-50m (refer to Figure 1). The buoys will be in the water all year round however the kiteboarding exclusion zone will only be in place from the 30th of September to the 31st of January.

It is worth noting that Kiteboarding WA’s preferred position with regards to the location of buoys was to move the north-eastern buoy a further 15m inwards to allow maximum use of the northern “beach 3” kiteboarding spot (refer to Figure 1). KWA felt that the kite shadows and kite position will be well north or northeast of the project area due to the wind direction (Southwest) in summer and the resulting direction and area that people kiteboard at the spot.  Ultimately KWA’s counter proposal was not accepted by the City of Cockburn. The City of Cockburn outlined that the 30m zoning was the minimum distance required to reduce the likelihood of kiteboarders and kites impact on shorebirds and that this was in line with Birdlife, CCWA, and other bird researchers advice. 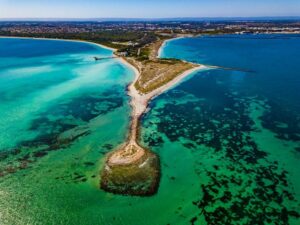 KWA’s favoured position with regards to the buoys was that they are removed when the Fairy Terns scouting/scraping/nesting season was complete i.e. buoys only in place from 1 September through to 31 January each year/season. KWA felt this would allow for the full and free enjoyment of beach 3 outside of the nesting season and also improve the visual amenity of the area.  The City of Cockburn acknowledged this however outlined that due to the complexity and cost of setting up and removing buoys that this was not a possibility, and the buoys will be in place all year round. 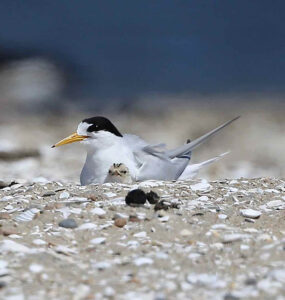 Although KWA’s counter proposal was not accepted KWA does support the project and the current exclusion zone. As ambassadors for the sport, KWA’s role is to ensure that future generations have the same kiteboarding experiences we do. To achieve this, it is paramount to apply safe, responsible, and appropriate kiting practices to minimise the risk of impact on the environment and negative attention to the sport. We believe that when appropriate kiting practices are applied, kiteboarding doesn’t leave any impact or trace on the environment. Therefore, the kiteboarding community’s awareness of the restrictions and its partnership in protecting WA’s Fairy Terns is appreciated.