Kiteboarding WA have received a number of inquiries following the recent announcement of the Lancelin Wind Festival and the exclusion of kites. KWA have reached out to the organisers to express their interest in adding Kiteboarding to the event with KWA’s support and resources. We have been informed the event is not the event that was previously held (Lancelin Ocean Classic), but a brand-new format started by volunteer windsurfers with the support of their sporting body, Windsurfing Western Australia. Each discipline that has been added to the event is one that is covered under WWA insurance/Sailing Australia insurance. The organisers have stated,

A decision was made by the new Partnership to keep it simple in the inaugural year. Organising the event is a huge undertaking and a financial risk without the massive government sponsorship of the past. We have huge enthusiasm from WWA and Race director Patrik Windsurfing and more recently RPYC. We believe an event run by these enthusiastic Windsurfers will be more of a success, as they totally understand what they need to make it a success. By removing paid event organisers of the past, that may have had other priorities, and re-focusing on the needs of the competitors and volunteers, we should hopefully end up with a more successful event.

The organisers also stated the possibility of adding kiteboarding in the future. Kiteboarding WA fully understands the limited resources, restrictions, and challenges, involved with organising a fully volunteer-managed event and understands the decision by the event organisers not to include kites in the inaugural event. We will keep in contact with the event organiser in the hope of adding kites in the near future. 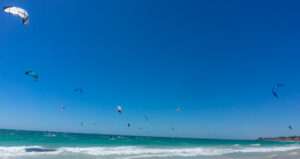